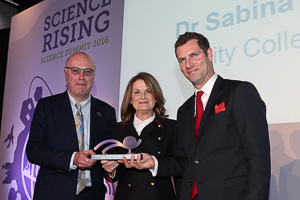 Dr Sabina Brennan was presented with a major award at the Science Foundation Ireland Science Summit in November 2016. The award recognises outstanding contribution to the popularisation of science, in particular where it raises public awareness of the value of science to human progress.

Sabina believes that science is for sharing. She translates complex concepts and scientific content into easy-to-understand, practical information. Her aim is to entertain and empower – she believes that once those two elements are in place education is a welcome by-product.

Her projects raise awareness about the importance of brain health and dementia risk reduction covering many aspects of science and human behaviour.

Her work increases the impact and visibility of scientific research adding value at personal, societal and global levels.

Dr Brennan’s animated films have been viewed in 140 countries and are used on 4 continents for education and training in healthcare and advocacy settings. The animations which have been translated into 15 languages have been exhibited internationally in the Washington Science Museum and screened in Brussels as exemplars of innovation for societal impact. In addition to film she has developed a number of websites, print materials and an app which was positively reviewed in the Lancet Neurology and selected as download of the month by the Irish Times in 2016.

Dr Brennan is regularly invited to speak to speak nationally and internationally to diverse audiences on a broad range of topics. She makes the neuroscience of human behaviour very accessible and has been described as a passionate and an inspirational speaker making science fun and fascinating.

Director General of Science Foundation Ireland and Chief Scientific Advisor to the Government of Ireland, Professor Mark Ferguson in his introduction to Sabina told the attendees to take note of and learn from this woman’s achievements. The award was presented by broadcaster and science communicator Jonathan McCrea.